Amma’s darshan is, as far as we can tell, unique in the history of the world. Darshan means “to see” and traditionally, a Master is seen but not touched. And in India, women do not touch men in public. But Amma’s darshan emerged as a loving mother’s embrace, beginning when She was only a teenager and held and comforted the lonely and suffering in Her village, and extending up to the present day. Amma makes herself available to anyone wishing to receive her blessing. There is never any charge, and no one is turned away. Hour after hour, day after day, year after year — for over thirty years now, She has been embracing all who come to Her. Man or woman, sick or healthy, rich or poor, regardless of religious faith, caste, young or old: even the very elderly, even Her own parents, regard Her as their very own Mother. Amma now travels across India and to over a dozen countries throughout the world. Everywhere She goes, She gives darshan to all who come to Her.

Amma’s hugs and kisses should not be considered ordinary. When Amma embraces or kisses someone, it is a process of purification and inner healing. Amma is transmitting a part of Her pure, vital energy into Her children. It also allows them to experience true, unconditional Love. When Amma holds someone it can help to awaken the dormant spiritual energy within them, which will eventually take them to the ultimate goal of Self-realization. — Amma

In India Amma has been known to individually embrace over 20,000 people in one day, sitting sometimes for over 22 hours. Over the past forty five years, She has embraced over 36 million times! 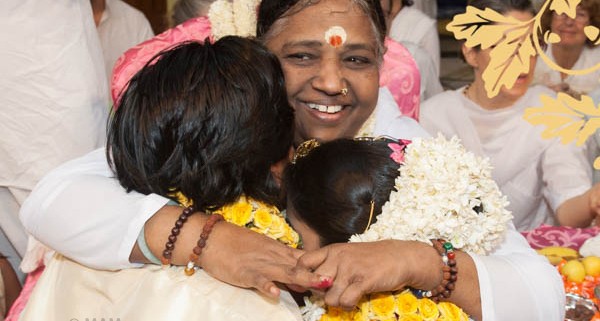 Timothy Conway, Ph.D., author of the book Women of Power and Grace and expert on spiritual figures, describes Amma as “one of the most glorious lights to appear in the history of religion. Just her stamina – embracing these millions of people one by one, day after day, without a break, all over the world – is some kind of divine gift. No mere human resources could accomplish this.”

Hers is an unconditional love which expresses itself through the unique vehicle of Her darshan: being ushered into the awesome presence of a Master, the sheer power of Her gaze, the indescribable sweetness of Her smile, the hug that ensconces one in eternity, the earthy voice whispering words of assurance, the gentle nuzzle on the cheek, and the gift of prasad.

As long as there is strength in these hands to reach out to those who come to her, Amma will continue to give darshan. To lovingly caress people, to console and wipe their tears until the end of this mortal frame – this is Amma’s wish – Amma

Each person’s darshan is a fresh experience because Amma Herself is ever fresh – spontaneous. Amma listens to our spoken words and unspoken thoughts, hugs the devotees and whispers a word or two in their ears. She knows exactly our need of the moment. With a pause here, a glimpse there, She instils moments of transformation. This is the testimony of thousands.

Hours pass and thousands are seen. On Her birthday celebrations, Amma has given darshan for twenty-two hours at a stretch with barely a break. She departs, Her shoulder stained with the marks of Her toil, Her cheek dark from hours of kissing, but She is still fresh as ever, Her eyes aglow with the radiant light of the Soul.